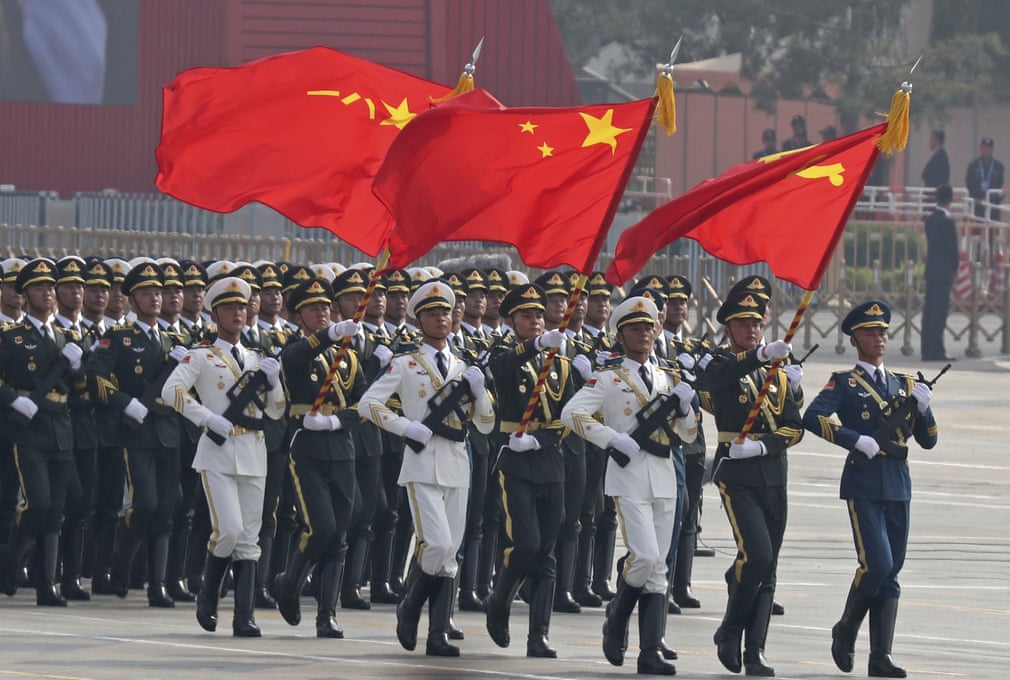 China staged a massive military parade in Beijing on Tuesday to mark the 70th anniversary of the founding of the People’s Republic, with much of the smog-shrouded capital city under a security lockdown.

President Xi Jinping inspected over 15,000 troops, more than 160 aircraft and 580 weapon systems in a show of the country’s growing military might and his drive to modernise the People’s Liberation Army.

He also delivered a bullish eight-minute speech hailing the accomplishments of seven decades of Communist rule and pledging to achieve his vision of a “Chinese dream” of national rejuvenation and global prominence.

“Seventy years ago on this day, Comrade Mao Zedong solemnly declared here to the world that the People’s Republic of China (PRC) was founded and the Chinese people had stood up,” Xi said while addressing a grand rally celebrating the PRC’s 70th founding anniversary.

The Chinese nation has since embarked on the path of realizing national rejuvenation, added Xi, who is also general secretary of the Communist Party of China (CPC) Central Committee and chairman of the Central Military Commission.

China, he pledged, will stay on the path of peaceful development, pursue a mutually beneficial strategy of opening up, and continue to work with people from all countries to jointly build a community with a shared future for humanity.

The founding of the PRC was “one of the great historic events of the 20th century,” said Robert Griffiths, general secretary of the Communist Party of Britain.

Now the world is seeing China as a voice for peace, he said. “China is playing a more and more prominent role in that way and … that can only be for the benefit, not only of the people of China but the benefit of all people across the world.”

“It was a day of celebrating China’s past and embracing its future,” said Tom Watkins, advisor to the Michigan-China Innovation Center, adding that China has now become “a key player in international relations and the world’s second-largest economy.”

Veronika Saraswati, a senior researcher at the Center for Strategic and International Studies in Indonesia, said she is heartened by Xi’s speech.

China has made great achievements in the past 70 years, and the Chinese people’s spirit of fighting, optimism and unity deserves to be emulated by other developing countries, she said.

The founding of the PRC in 1949 ended a “century of humiliation” of the country, said Rommel Banlaoi, president of the Philippine Association for Chinese Studies, adding that the achievements China has made in the past 70 years are “tremendous.”

Noting that China has grown into the second-largest economy and one of the major countries in the world, Banlaoi attributed “the landmark” to the leadership of the CPC and the concerted efforts of the Chinese people.

Under the leadership of the CPC, China has become an important participant in many fields of international development, said Cobus Van Staden, a senior researcher on China-Africa relations at the South African Institute of International Affairs.

He noted that China has lifted hundreds of millions of people out of poverty, and has achieved huge progress in science and technology, innovation, infrastructure construction, and green energy.

Takakage Fujita, director general of a Japanese civil group dedicated to upholding and developing the well-known Murayama Statement, said Xi’s pledge that China will stay committed to peaceful development and mutually beneficial opening-up will surely receive echoes and support from around the globe.