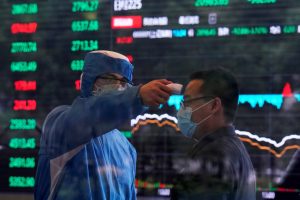 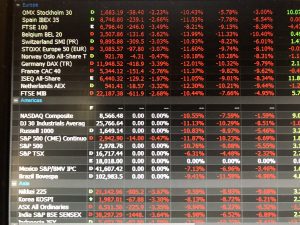 Stock markets across the globe are suffering their worst week since the global financial crisis of 2008 as fears over the impact of the coronavirus continue to grip investors.

Asian markets saw more big falls, while in the US, the Dow Jones recorded its biggest daily points drop on Thursday.

Investors are worried the coronavirus impact could spark a global recession.

The news of more coronavirus cases, notably in Italy, has raised concerns of a much larger economic effect than previously expected.

In an interview with Sky News, Bank of England governor Mark Carney warned that the coronavirus outbreak could lead to a downgrade of the UK’s economic growth prospects.

Dozens of firms have warned of disruptions to their supply chains and a decline in consumer demand.

US tech giants Apple and Microsoft have both said their business will be affected, while US investment bank Goldman Sachs warned on Thursday that it now thinks the coronavirus will wipe out any growth in US company profits this year.

Shares in airlines have been especially hard-hit as travel bans are imposed and companies limit staff travel. On Friday, airline group IAG – which owns British Airways and Iberia – said its earnings had been affected by “weaker demand” as a result of the outbreak.

BBC  global trade corespondent Dharshin David analysed that “a known unknown” is how one major company boss described the economic fallout of coronavirus to media.

But what the markets have woken up to – perhaps belatedly – is that the disruption to the economic activity from coronavirus is wider, deeper and perhaps longer lasting than previously assumed.

As major outbreaks spring up outside China, it is clear that it is not just global supply chains but also demand from consumers that’s suffering, as efforts to contain the virus keep them away from shops, bars and restaurants.

What is unknown is exactly how bad and how lasting the impact could be. But what is known is that this comes at an already tricky time for the global economy with Japan, Italy, China and the UK among those already seeing growth faltering.

As economists slash their growth forecasts, policymakers are debating how much they can do to help, given how low interest rates remain. What’s entirely clear is that investors face more anxiety ahead. 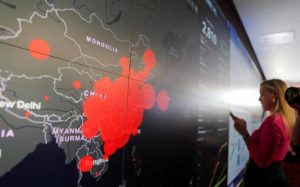 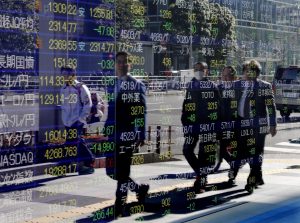 Russ Mould, investment director at AJ Bell, said: “This has been one of the worst weeks on the markets in a very long time, leaving investors’ portfolios battered and bruised.”

Mayank Mishra, a strategist at Standard Chartered Bank, said: “Previously the market had taken some comfort in the falling infection rates in China as a result of containment measures put in place earlier.

“But the spread of the coronavirus infection outside China, with clusters emerging in South Korea, Italy and Japan, has increased concerns significantly.”

Several key global market indexes – including the FTSE 100 and the Dow Jones – have fallen 10% from recent highs. A drop of that magnitude is generally referred to as a correction.

“What markets are trying to digest is how long this is going to go on and what the economic damage will be,” Sonja Laud, chief investment officer at Legal & General Investment Management, told the BBC.

However, Ms Laud noted that the falls followed a very strong period for shares. “They [this week’s falls] are significant if you look at a very short period of time, but if you put it in the context of the very strong markets in 2019, then the starting point has been all-time highs for quite a number of markets.”

Many analysts are now expecting the US central bank to cut interest rates to try to counter any impact. However, Ms Laud said that many central banks had little room for manoeuvre, given that rates are already so low.

“Realistically it’s mostly the Fed and to some extent the Bank of England that still have the chance to cut rates,” she said.

“I think there will be a huge focus on governments to step up fiscal stimulus under the assumption there is not a lot more that central banks can do to stimulate the economy.”

The oil price has also fallen sharply on fears that the virus outbreak will lead a big drop in demand, as factories reduce or halt production during the outbreak.

The price of Brent crude fell nearly 2% to $51.21 a barrel on Friday, its lowest level for more than a year. 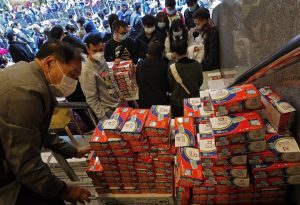 As of Friday 28 February, a total of 132 companies listed on the London Stock Exchange have warned that the coronavirus outbreak has impacted their business and is likely to affect their profit outlooks for 2020.

According to Bowmore Asset Management, concerns about the effects of coronavirus on the markets over the last 10 days has caused a significant shift from risky assets to “safe haven assets”.

This movement could continue for a while, as seen by on Thursday, US stocks were sold off so sharply on the Dow Jones Industrial Average that it caused the worst one-day point drop in history.

“Investors with a long-term horizon need to avoid the temptation to exit the market,” said Charles Incledon, client director at Bowmore Asset Management.

“Past corrections show that big sell offs are followed by rallies that quickly make back a large amount of the ground that has been lost; however, it is hard to time that.

“Some sectors that may be more heavily sold, such as oil and gas, and travel, could present real opportunities to buy at significantly lower levels.”