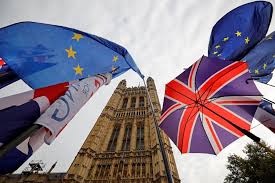 News from Reuters, Britain wants a durable relationship with the European Union for “decades to come” in financial services as part of a new free trade agreement with the bloc, Britain’s finance minister Sajid Javid said today

Britain left the EU last month and unless it agrees access to the bloc by December, its financial services sector will be cut off from its single biggest customer from January 2021.

“If the EU, like us, wants a durable relationship, we should also include measures to directly address the long-term needs of industry for a reliable equivalence process,” Britain’s Chancellor of the Exchequer Javid said in an article in City AM newspaper.

Javid called on the EU to find Britain’s financial sector “equivalent”, a reference to the bloc’s system of financial market access, based on Brussels acknowledging that UK regulation is as robust as the EU’s rules.\

But it falls far short of the unfettered access banks, asset managers and insurers in Britain had to the EU when Britain was a member state.

Equivalence only covers some financial activities, basic banking is excluded, and Brussels can in theory scrap access with just 30 days notice in some cases.

Britain and the EU have agreed to make such an assessment by the end of June, but Brussels has warned that actual financial market access will be linked to broader trade issues, such as fishing rights.

Findings of equivalence now and creating a framework to “sustain trust and cooperation” for them to endure into the future offer the best solution to the question of agreeing Britain’s relationship with the EU this year, Javid said.

“This is important not only in the short term, but to establish the norms and ways of working with the EU that will endure for decades to come,” Javid said.

Javid said Britain would no longer be a “rule taker”, meaning it won’t continue to cut and paste the bloc’s financial regulation into UK law as it did while a member of the EU.

EU regulators have privately questioned how Britain could have equivalence-based access over the longer term without staying aligned to rules in the bloc.

An unverified photo of a government briefing paper on equivalence taken outside Javid’s Downing Street office by PoliticalPics on Monday spoke of “comprehensive, permanent equivalence decisions” as an opening position for Britain.

But Michel Barnier, the EU’s chief negotiator, told the European Parliament on Tuesday that Britain must be “under no illusion” on financial services as there will be “no general, global, permanent equivalence” with Britain.

“There will be no common management,” Barnier said.

The UK briefing paper also mentioned a “landing zone” where financial services would not be included in a broader free trade agreement, equivalence access would be selective and accompanied by a joint declaration and series of MoUs when it comes to regulatory cooperation rather than a more comprehensive framework.

Equivalence is used by countries like Singapore, the United States and Japan, but it has never been applied before to a huge financial centre on the EU’s doorstep. The bloc has been toughening up conditions for equivalence ahead of Brexit.

Brussels has also made it clear that if equivalence is granted for trading, clearing or other financial activities, its regulators would closely supervise UK rules to ensure it was staying aligned to those in the bloc.

Javid said he would publish a white paper on financial services in the spring on the future of the sector.

Faced with uncertainty over equivalence, financial firms in Britain have opened hubs in the EU to avoid being cut off or reduced access.