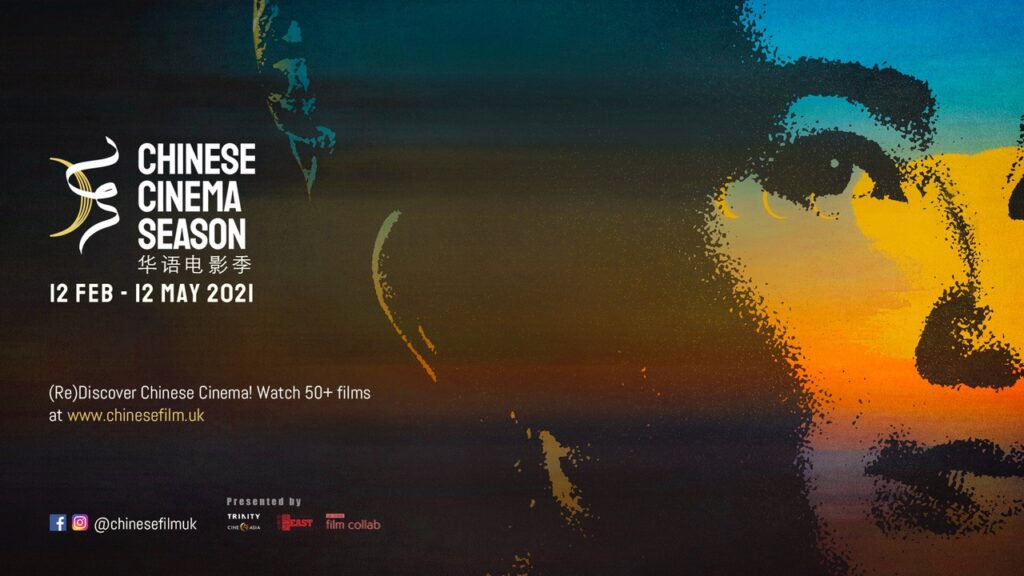 Independent distributor Trinity Cineasia together with Filming East Festival and UK-China Film Collab announce the first wave of titles and genres for the first edition of the Chinese Cinema Season.

Over 50 films will be offer to the festival season, giving the opportunities for audiences accessing the best of Chinese cinema, and enriching the diversity of films available on VOD. The season will be divided into genres and mini retrospectives, with the aims of recontextualising titles, enriching UK lockdown life and presenting Chinese culture in a fresh way with new perspectives. Ultimately, the season is a love letter to Chinese Cinema.

From 12th February, there will be 20 films available and new titles will be added each week, each staying on the platform for one to two weeks at a time. The festival will open with four genres: Shanghai Animation Film Studio Retro, Approaching Reality, Debut Spotlight and Domestic Hits. These will later be joined by Lou Ye Mini Retro, Hong Kong Reimagined, Cinephilia Forever and some forthcoming surprises. The festival is offering individual tickets for films as well as season passes, with some films available to watch for free.

Alongside the films on show, there will be Q&As and panel discussions with industry professionals, filmmakers, actors, and academics.

“The film industry has been silent for a long time as impacted from pandemic” said by Cedric Behrel, head of Trinity Cineasia. “We have been thinking about how we can connect with our audience in a more meaningful and lasting way. Not only share some of the latest updates.  We would like to take this opportunity to meet again with wonderful movies and connect with the world” Beharel added.

One of the listed films, The Monkey King, was based on the well-known novel Journey to the West, it took almost four years to complete, its 3D restored version has been chosen to be the opening film at the Shanghai International Film Festival in 2019. The artistic and technical standard demonstrated by The Monkey King is extremely high; one that is yet to be met by other adaptation attempts since the 1960s. There will also be the opportunity to watch the original version of Ne Zha Conquers The Dragon King (1979) for the first time in the UK.

Audience will have an unique opportunity to learn about the tradition of Chinese animation which is aesthetically distinctive and certainly different from Disney. Art enthusiasts will appreciate traditional art techniques used in these films such as water-ink and papercutting. All animation films shown in this programme are hand-drawn and made, which brings a sense of warmness that is missing in contemporary computer-generated animation.

Trinity CineAsia is an independent film distributor based in the UK, representing the largest catalogue of Chinese films in the UK, including the IP MAN franchise and many films featuring key Asian film luminaries such as Jackie Chan, Donnie Yen and Chow Yun Fat. It aims to release the best Chinese and Asian films in cinemas simultaneously with their domestic release, as well as on home entertainment and on-demand platforms.