Donald Trump has directed his team to cooperate with an incoming President-elect Joe Biden administration after the General Services Administration ascertained the Democrat as the “apparent election winner”.

The US president, in his closest statement yet to finally conceding he lost, tweeted: “In the best interest of our Country, I am recommending that Emily (Murphy, GSA Administrator) and her team do what needs to be done with regard to initial protocols, and have told my team to do the same.”

The move clears the way for the start of an official transition and allows Mr Biden to coordinate with federal agencies on plans for taking over on January 20.

An official said Ms Murphy made the determination after the president’s efforts to subvert the vote failed across battleground states, most recently in Michigan, which certified Mr Biden’s victory Monday.

A Trump appointee, Ms Murphy had faced bipartisan criticism for failing to begin the transition process sooner, preventing Mr Biden’s team from working with career agency officials on plans for his administration, including in critical national security and public health areas. 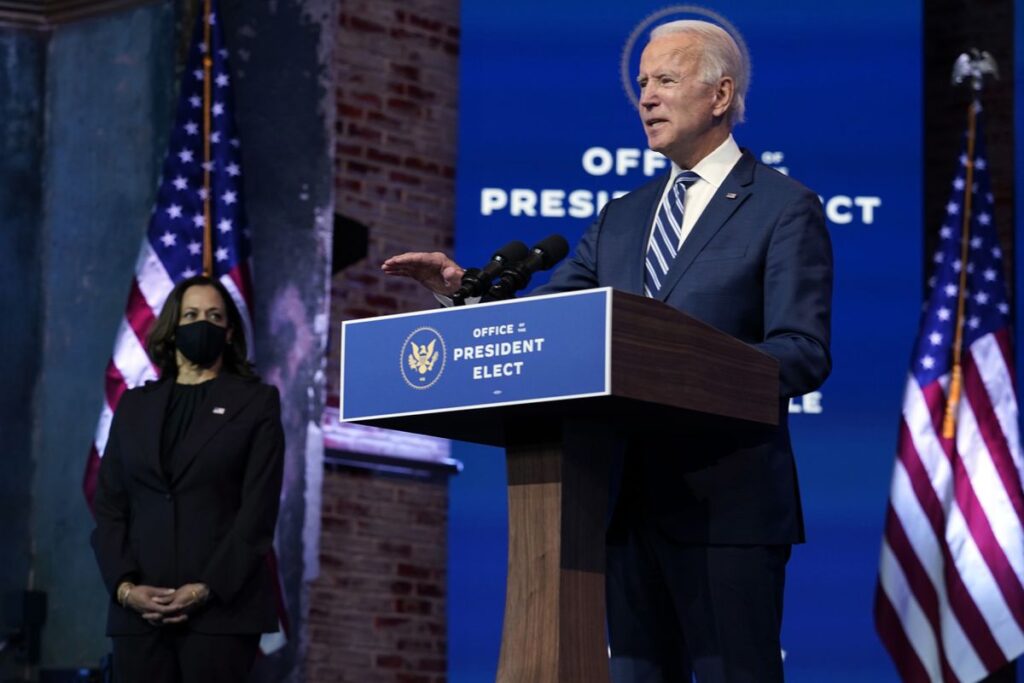 “Please know that I came to my decision independently, based on the law and available facts. I was never directly or indirectly pressured by any Executive Branch official – including those who work at the White House or GSA – with regard to the substance or timing of my decision,” Ms Murphy wrote in a letter to Mr Biden.

However, Mr Trump still appeared defiant, saying he would “keep up the good fight and I believe we will prevail.”

The move by the GSA means Mr Biden’s team will now have federal funds and an official office to conduct his transition over the next two months.

Mr Biden’s team welcomed the long-delayed release of government aid for his transition to the White House, a step he said was crucial to “a smooth and peaceful transfer of power.”

“The GSA administrator has ascertained President-elect Joe Biden and Vice President-elect Kamala Harris as the apparent winners of the election, providing the incoming administration with the resources and support necessary to carry out a smooth and peaceful transfer of power,” Mr Biden’s team said in a statement.

“Today’s decision is a needed step to begin tackling the challenges facing our nation, including getting the pandemic under control and our economy back on track. This final decision is a definitive administrative action to formally begin the transition process with federal agencies.”

The shift from Mr Trump comes after three weeks of evidence-free claims that the November 3 election was stolen from him.

Democrats have accused the president of undermining US democracy with his refusal to accept the results.

“This is probably the closest thing to a concession that President Trump could issue,” said Senate Democratic leader Chuck Schumer.

Mr Biden had already begun naming members of his team without waiting for government funding or a Trump concession.

Earlier in the day, the President-elect announced a foreign policy and national security team crammed with veterans from the Barack Obama years, teeing up an end to the upheaval under Mr Trump and a return to traditional US diplomacy.

Sources:  From Telegraph and BBC News

Markets respond as manufacturing in China and South Korea grows at fastest pace in a decade Hopes that...

UK government may have left it too late for businesses to prepare properly for the end of free movement...

Plans for an underwater data cable between Los Angeles and Hong Kong have been dropped after the US government...

Times Publications Global Business Reports have been setting standards since 1994 providing  investors and companies with the resources to make good decisions in their chosen markets.... END_OF_DOCUMENT_TOKEN_TO_BE_REPLACED