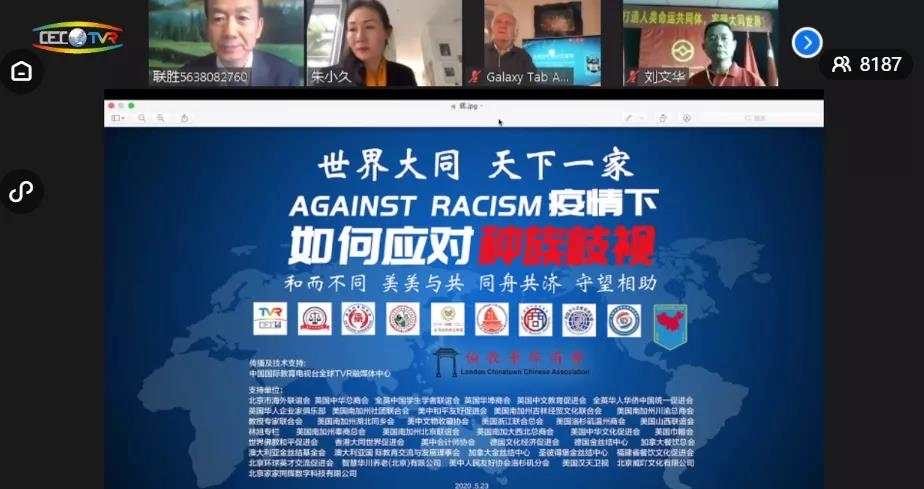 The virtual forum “One World, One World-How to Cope with Racial Discrimination in Epidemic Situations” recently brought together international Chinese communities via social media platform Wechat on the 23rd of May. By Jian Ping Sun

Dr Zhu Xiaojiu gave an invaluable keynote to clarify the concept of racial discrimination for the audience from a legal and moral perspective. She encouraged the international audience to stand up together to safeguard the rights, interests, and dignity of overseas Chinese around the world. Responding passively strengthens the harmful impact of racial discrimination on society. Responding actively by reporting incidents to the police and taking legal action is part of everybody’s duty to protect themselves, their families and their society. Overseas Chinese are representatives of China and valuable contributors to their adopted country. Refusing to tolerate racism at an individual level protects the great strength and indomitable spirit of their motherland and safeguards the best interests of their adopted home. This novel virus does not distinguish between races and does not respect borders.

The number of reported cases is the essential statistic. Only when the statistic is significant will the government and local authorities take notice and respond with appropriate protection measures.

The most important way to report racism or hate crimes is to notify the police at the time of the incident or as soon as possible afterwards. This can include calling the police or making an online report. Chinese people in the London area can also directly contact the London Police Chinese and Southeast Asian Employees Association. If Chinese children encounter racial discrimination in the school, parents can report it to the school headteacher. If Chinese staffs encounter racial discrimination in the workplace, they can report it to their line manager and human resources. 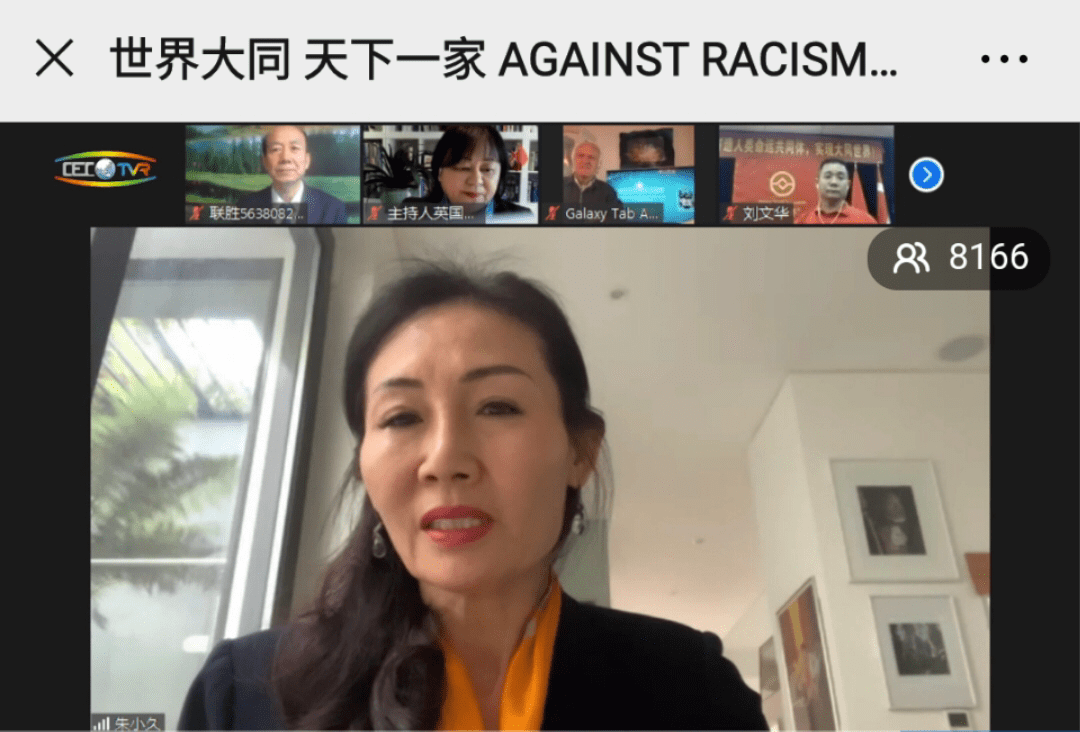 Dr Zhu also encouraged overseas Chinese to get involved in their local communities to help the vulnerable and key workers during this pandemic. This could include delivering food and medicines to those who are shielding, fundraising for NHS staff welfare initiatives or sewing masks and scrubs for carers in nursing homes to name but a few ideas. Kindness and compassion speak louder than ignorance and hate.

Mr Wang Xingang, local councillor and Conservative campaigner, encouraged the audience to write to or email their local councillors and MPs about their experiences and seek support from charities. He re-emphasized racial discrimination is not only a criminal act but also a topical issue that MPs are deeply concerned about. Local MPs are elected to represent their constituents in parliament. Their job is to listen to their constituents’ concerns and to advocate for them. Chinese people need to inform their local MP of the racial discrimination happening currently in their community. Only when their MP is aware and fully informed can the MP appropriately address the issue to improve their community at a local and national level.

Speaking from his own leadership experiences in efforts to improve his local community, Wang Xingang reflected on successful integration into mainstream society. He encouraged Chinese people to take up volunteering and get involved with their local council and school governor boards. 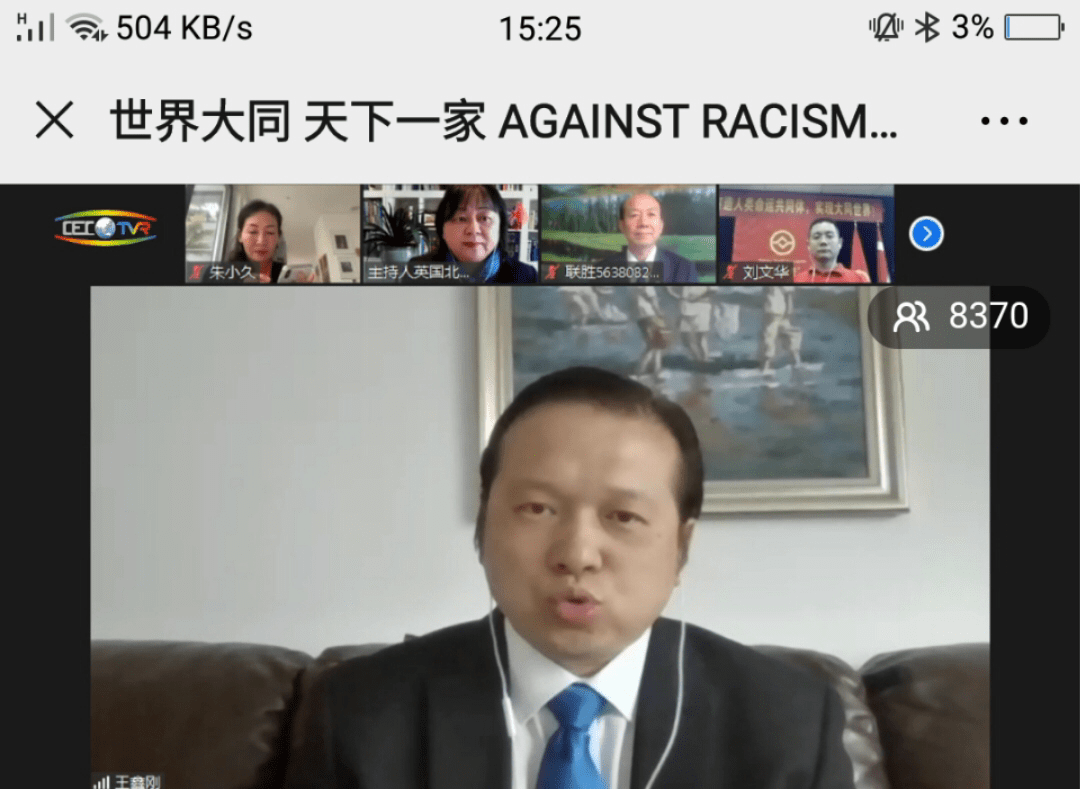 Cases of racial discrimination in the UK have gradually increased over the past five years. From 2018 to 2019, there were 103,000 reported hate crime cases in the UK. Since the start of the COVID19 pandemic, reported crimes of xenophobia increased significantly. There were 360 crimes reported in 2019. There were 267 crimes in the first 3 months of the pandemic alone. Currently key UK legislature includes the Public Security Law, 1986. This includes 12 related laws to punish racial hatred and religious hatred. Under this law, the minimum prison sentence is 6 months and the maximum is 7 years. The “Crime and Disruption of Public Order Law” declared in 1998 included nine related laws to punish racial and religious discrimination, with an increase in the maximum period of imprisonment from 7 years to 14 years.

The third keynote was delivered by Ms Zhang Sujiu, the Honorary Chairman of the Roundtable of Southern California Chinese-American Organizations. She discussed current racial discrimination in the United States. Ms Zhang said that as the virus has spread to all part of the US, the inadequacy of the American government’s response has caused tremendous harm to its people. Currently, the number of infected patients and deaths in the United States account for one-third of the world’s death total. A group of prominent American politicians, including the US president, attempted to discredit China to evade responsibility for the consequences of their failure. They frequently used discriminatory, inflammatory terms such as “Chinese virus” and “Wuhan pneumonia” to concoct statements such as “the virus originated from the Wuhan Virus Research Institute” and “spread to the United States.” The US president played a direct role in aiding xenophobia to spread as fast as the virus throughout the US. Ms Zhang called on the international audience to challenge racial discrimination together. 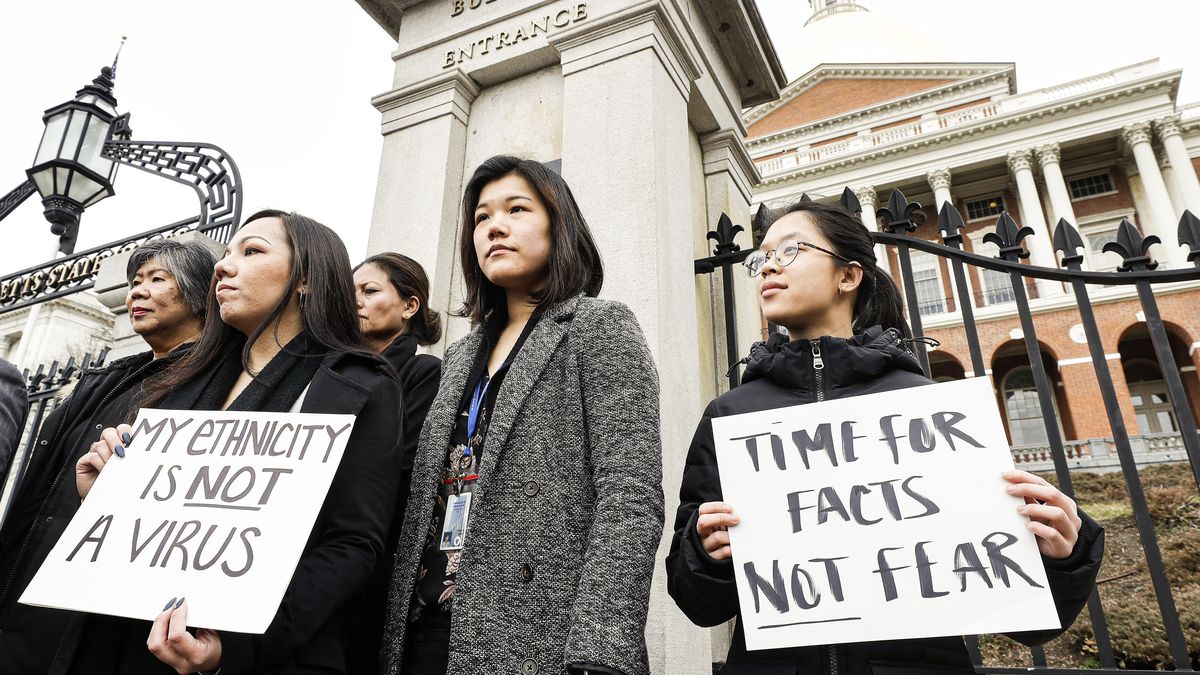 Although COVID19 is a new disease, racial discrimination is an old disease that the world has long struggled to treat. International laws such as the United Nations’ International Convention on the Elimination of All Forms of Racial Discrimination and the European Union’s European Convention for the Protection of Human Rights and Fundamental Freedom are well-established. Overseas Chinese are encouraged to seek help from the police and their local embassy if required. The law is on their side.

“One World in the World-How to Cope with Racial Discrimination in Pandemic Situations” was chaired by Li Hai, President of the UK Beijing Association, He Jianfei, Secretary of the Beijing Overseas Friendship Association and Zhang Jinlong, Chairman of the UK Chinese Business Association. Over 8000 Chinese people from around the world participated in this innovative event.

Times Publications Global Business Reports have been setting standards since 1994 providing  investors and companies with the resources to make good decisions in their chosen markets.... END_OF_DOCUMENT_TOKEN_TO_BE_REPLACED